This proposal addressed the critical need for improved infrastructure and drought preparedness within four rural and predominantly disadvantaged communities through a suite of water conservation and delivery-improvement projects.

The Department of Water Resources awarded $3,197,503 to fund the following projects four projects:

In 2008, the CABY Planning Committee (PC) announced a “call for projects,” as part of its regular IRWMP update process. After reviewing dozens of projects covering a wide range of issues, the CABY PC voted to establish water system shortages and drought preparedness as the project development focus for 2009/2010.

These projects included infrastructure improvements and long-range conservation planning as a strategy for responding to future climate change, water shortages and/or drought conditions. Projects from four communities – Nevada City, Washington, Alta/Colfax, and Grizzly Flats — became the nucleus for a regional outreach and project development effort by CABY staff, aimed specifically at small, rural and disadvantaged communities with an emphasis on planning for and minimizing water shortages. Additional outreach was aimed at creating a pilot water trust entity to address the water needs of natural resources in the region during low flow or drought conditions, and climate change in the longer term.

By working closely with its communities, CABY created a suite of integrated projects aimed at preparing these smaller and less affluent jurisdictions in the region to respond to individual or region-wide water shortage events as well as sustained impacts from climate change. All four communities currently depend on old, degraded, substandard, or functionally obsolete infrastructure, whose improvement could benefit not only local health and safety and water supply, but natural systems and domestic supply outside the region. In some cases the water system infrastructure was originally installed in the 1800s. The targeted infrastructure is subject to extensive leakage and no longer functions to design capacity. Distribution lines within these local systems often fail to deliver to residents and fire fighters any pressure at all for multi-day intervals. Additionally, the tanks and storage facilities that supply these systems routinely spill and waste large amounts of treated water. 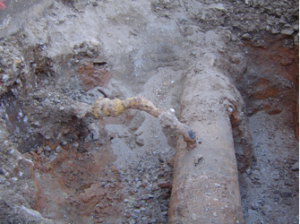 This photo illustrates the age and poor condition of the water distribution lines in Nevada City. 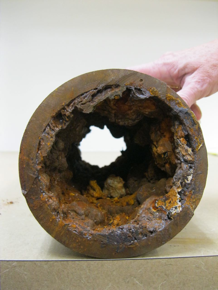 Illustration of the age and poor condition of the water system in Nevada City.

Due to the age of much of the infrastructure targeted in this proposal, repair is not a feasible option and the cost of replacement exceeds the financial resources of these communities.